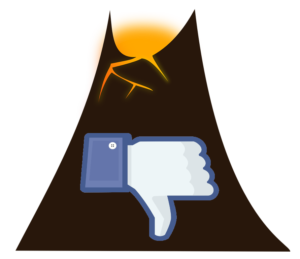 We once agreed to disagree…

Back when I began working social media for my business (about eight years ago), people were a lot calmer and more balanced in their political viewpoints…except for one friend of ours. My husband and I would have intense discussions about the President of the U.S. at the time, the presidential race’s candidates and other topics we never saw eye-to-eye on such as creation vs. evolution. At the end of the evening, however, we always parted friends and agreed to disagree. That is just how my husband and I were brought up, respecting the opinions of others.

But our friend was young and fiery and would shake her head that we believed what we did, and by some miracle it never interfered in our friendship. To this day we don’t agree and even though she moved to the United Kingdom, she still keeps up on the politics of her parent’s native land – and is still fervent that she is right. Even when Obama got in (who she heartily supported) and after a few years expressed her disappointment that he hadn’t solved the world’s problems, she never learned to temper her righteous fervor with facts and common sense.

Today, in 2018, do the landscapes of Facebook and Twitter resemble the turbulent recent eruption history of Kilauea? They should. The fiery home of the volcano goddess Pele has always been prone to long periods of devastating activity, yet everyone acts as if this latest, long-term eruption of wide-spread destruction is something new. If they looked up the volcano’s geological history, they would know better.

Politics, like volcanoes, have their quiet times and eruptive times that last months, sometimes years – especially when someone is in office we don’t like. Remember your parents complaining about Regan in office? Nixon? Or when you’re as old as I am, it might have been grandparents bitching about J. Edgar Hoover. This is nothing new, but social media takes it to a whole new level.

Hating the next door neighbor…across the world

Back in our parent’s time if we didn’t agree with the next door neighbor, we might have had an argument or intense discussion with them, walked back into the house and ignored them until the next election – or their impeachment (ala Richard M. Nixon). Now, those people you friended on Facebook and Twitter who you thought you knew – including your friends – have taken on the viciousness anonymity and not being face-to-face with someone engenders. Shocked that the friend you thought you knew knows words like that? They would never say that to someone’s face, yet being behind a computer brings out the worst in some people, especially with hot topics like politics and religion.

Ignoring the volcano or facing it down?

It is tough for the small business entrepreneur to pursue their business and stay out of the hot-topics like sex, religion, politics and sports. When I was in Quattro University, we were told time and again to steer clear of them at all costs for fear of alienating our audiences. Forced to discuss “safe” topics like pets, favorite getaway spots, science and medicine are okay, but people tend to bond over topics both sides feel passionate about, so what do we do?

I have thought a lot about this during this current administration. Living in a state where the majority of people not only oppose who I voted for – and sometimes vehemently – I kept my opinions to myself even more than usual. Even outside of business I found myself around formerly sane friends who had gone off the deep end and could not stop spewing hate – even if they knew we once upon a time had agreed to disagree. It was hard enough, especially in my religious belief circles, to locate fellow worshipers to comfortably interact with, and when I did and they too, “went off the deep end” I knew I had to make a choice. I was frustrated and angry that I was the one who had to “keep my mouth shut” while they felt free to spew their hate and intolerance towards a man they disagreed with on one hand and then went into worship declaring they “loved all creatures great and small”.

The hypocrisy disgusted me and I had to leave.

So how do you keep your sanity and still surf the web?

People’s opinions and their extremist viewpoint aren’t going away – ever, but we still have to put up with it while we conduct both business and pleasure on the world wide web.

I learned from watching my husband that one can surround oneself with those of a similar point of view who are good friends and influential networkers without sacrificing our rights to our opinions and our right to view them in a safe environment. A couple of months ago I purged my personal Facebook profile of hate-spewing crazies – both on the right and the left, though truth-be-told, they were ALL leftists (I kid you not!). Reconfiguring my feed’s priorities in who I received notifications and posts from lowered my blood pressure and made viewing Facebook enjoyable again. Now I am experimenting with posting a slightly political post or two to see if those who remain will, if not agree, at least be of the same calm, even temperament as I am and not act batshit crazy. Today I start the process with a much more volatile arena – Twitter and have high hopes that with careful pruning of my connections and adding the right ones, I can go back to tweeting happily instead of as if walking on eggshells.

In the recent Digg article “Anatomy Of A Fake, Viral Story“, we see a perfect example of a hard-to-believe story going viral and driving massive traffic to websites around the world. Few stories that hit this legendary status are broken down in such a way that you can see exactly how it happened, which is what makes this story fascinating to myself and marketers everywhere.

Most people want their piece to go viral for one or both of two reasons – money and/or fame. Will fake viral stories accomplish this? Is such a story worth the traffic it generates? Let’s explore that.

Money – Is viral traffic interested enough in your fake story to contribute to your bottom line? The majority of viral story seekers are looking for quick entertainment. They are rarely interested in little else the hosting website has to offer them. Sure, they might sign up for updates, but a look at the statistics of whether they actually open and read the emails sent to them reveals the truth; often the emails are deleted and after the third or fourth email, they hit the “unsubscribe” button, or worse, flag it as spam and get your company in trouble with your internet service provider.

Fame – No one likes being lied to and a fake viral story’s job is to look credible to the reader long enough to get them to click. How would someone view your website if they found out that you were peddling fake sensationalism? Would they trust you in the future? Would they trust your products, your customer service or warranties on anything they purchased if you are a retail business? Would they trust your word on anything in the future? Doubtful. We all have experienced how hard it can be to convince someone to buy from us and not our competitors. Starting off with a lie to draw them in is the worst possible strategy imaginable, unless, of course, you are the National Enquirer or Onion.

In the final analysis, it is pretty cut and dried that fake viral stories are responsible for traffic that hits hard and fast, but rarely sticks around. They are off as soon as the next sensational piece hits their radar and won’t even remember you the next day. Hardly the type of loyal customer that anyone in business could benefit from.

Civic Site Design deals only in reliable information from verified sources. If you have a need for such on your website or in your social networking circles, please feel free to contact us at info at civicsitedesign.com (replace the “at” with an @ sign).

Networking is not just about making connections and getting referrals. If you think that is all it is, you better go find yourself a book on human interaction and relearn how to talk to and treat people. If this sounds harsh, it might be because you need the book. I won’t apologize for the bluntness in this post and if it is found offensive, methinks it is because it struck a sore spot. Those that are ever evolving and refining their people skills will stop and take a look at what is said here and ask themselves, “Do I do that to people?” “Is that why I’m not getting as much business as I could have?”

There are few better ways to discover the value of your networking than in how people interact with you – especially when there is a crisis. People are mirrors held up to ourselves, and they can be brutally honest, whether we want them to or not. So, instead of taking offense at the networker who treated you like less of a person and more like a source of income, learn from the experience. We as a specie are so quick to take offense and so slow to learn. Don’t be stuck at the dead-end of the evolutionary chain with no sales and worse – no friends.

Remember, when you’re old and retire, or move on to another line of work where you no longer network, the friends will stay with you.

The networkers will leave. 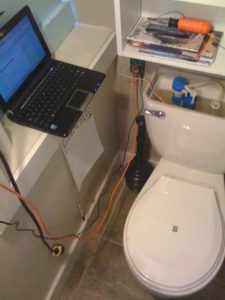 (This scares the heck out of me)

When social networking fledgling giant Twitter began to pick up speed and gain popularity last year, all I heard from clients was, “I don’t want to get on it because I couldn’t care less when someone goes to the store, sees a good program on t.v. or is sitting on their porch doing nothing.

But then we all started hearing how staggeringly useful it was when a hotel was bombed by terrorists in Southeast Asia – the “tweeters” getting the story out to the world before the media could comprehend what had happened. Again, when unrest hit Iran and their government imposed a media blackout, Twitter was asked by the U.S. government to delay their maintenance cycle so that the flow of information from that beleaguered country was not impeded. I myself used Twitter to warn locals of a water main break and to avoid that area like the plague and recently to warn my clients of the health warning of a salmonella outbreak in eggs across the United States.

What does all this tell us?

That Twitter is a force for either good or evil, depending on who you follow in your network. 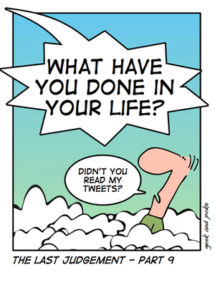 It is easy to blame the other guy for their tweets, but since we cannot control the actions of others, doesn’t it make more sense to take the responsibility of harnessing Twitter’s power for good and choose who we follow more carefully? Take a few seconds when considering whether to follow someone or not and do a quick scan of their last few tweets…are they garbage or are they useful, inspiring, uplifting and motivational information? Choosing to association with people that tweet with care will also reflect better of our character to others who choose to follow us. No one with a busy networking schedule wants to follow someone who follows gossipers and time-wasters, or worse, someone who constantly swears…if you really need to follow people like that, get a private Twitter account and follow such people anonymously. You will find it will make life a lot easier.