Okay, I’ve got something really nifty for all us ‘droid nerds out there this week. I was reviewing a rather nicely set up mobile phone & broadband website and seeing the next generation of Samsung Galaxy S class phone out there listed under “Best Selling Phones”, it reminded me I have been wanting to review my newest ‘droid app I stumbled upon a couple of weeks ago. (The next generation of Galaxy S phone is, btw, white. Weird, considering I am so used to mine which is black with a purple, shock-absorbing case surrounding it.) 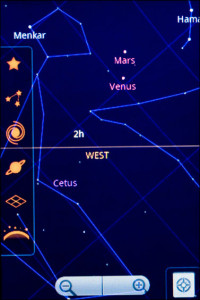 Google Sky Map is the best app you could possibly hope for if you are a night sky watcher. A free, Open Source program donated by Google, over 175,000 users rate it a 5 out of 5 and with good reason. Point it anywhere, ANYWHERE, day or night, and it will show you exactly what is out there beyond planet Earth. It views stars, constellations, planets, Moon, Sun, Meteor Showers, the Horizon line, poles & Messier Objects (whatever that is). Any of these objects can be switched off with the flick of a finger for clearer viewing of your object(s) of study.

Perhaps one of the more fun perks of this app is called, “Time Travel”. Choose a date and a time somewhere between the years of 1900 – 2100 and view the sky as it would appear on that date. How cool is that? The Apollo 11 moon landing and solar eclipse of May 29, 1919 are pre-loaded under popular dates, but any date and time is programmable into the interface for your viewing study and pleasure. Once in Time Travel mode, one can tap the buttons to move forward or backwards in time at the ratio of anywhere from real time (1 second to 1 second) to 1 week per second. Teach kids how the movements of the planets appear from Earth in a real neat way.

Having trouble locating the object of your interest? There is a search mode. Just plug in the name of whatever it is you want to view and the app will find it for you on the map. Under the Gallery you can view beautiful shots of our sister planets, nebulas, galaxies, the Pleiades and star clusters as the Hubble telescope has caught them on its cameras.

This is by far the most fun app we have come across in our reviews AND if you pick it up NOW, you will be able to see many of the planets aligned in a straight line including Pluto, Neptune, the Sun, Mercury, Uranus, Venus and Jupiter. Quite a line up, especially when the Moon gets into the act during the evening hours.

As always, we welcome feedback, comments, etc. Pick up Google Sky Map for yourself, check it out and let us know what you think.

The “official” Facebook app is an improvement over the earlier version of the app and worth it for all us Facebooking fools out there to either pick up or upgrade from an earlier version.

It opens up to Top Stories. When tapped, the “All Stories” button at the top opens up a scroll-up at the bottom with options to view Status Updates, Photos, Links, Pages, Events or Videos – an improvement over the old version of the app. The Photo and Status buttons at the top are convenient since they are the most often function used by people checking in on Facebook (the photo button also gives the option to upload videos). Status Updates is not to be confused with the “Status” button. The Status Updates are everyone else’s statuses while the Status button in the middle of the bar below is the one used to update your own status.

For those that liked the convenience of the 9-icon opening panel, you can still access that dashboard by clicking on, weirdly enough, “Newsfeed” at the top left of the screen. (Guys, you could have just called it something plain yet familiar like…oh well, say, “Dashboard”? That way you wouldn’t have confused the heck out of us.)

I confess I have not yet tried the chat function, so if anyone has experience with it, please feel free to drop a comment on the end of this blog to let us know how it performs.

Note: version 1.7.2 is now available. I will be updating this review as soon as I install it and get some practical use out of it. Give it a day =D

“Where’s My ‘droid” is an Android app designed to help you find your lost phone. Simple explanation, simple function, powerful app! Six million users and over 30,000 Likes on Facebook can’t be wrong, right?

This neat little gem is worth the space on your phone and the time and trouble to set it up right, though I found setting it up was no trouble at all for yours truly. If I can set it up, so can you!

What sold me on this particular app was the solution to the past, obvious hurdle of clever users calling their phone to find it, only to remember they had turned the ringer off! This app WILL TURN THE RINGER BACK ON. How smart and cool is that?!?

The opening paragraph on the ‘site declares, “When you lose your phone while the ringer is turned off it can be impossible to find it. Where’s My Droid fixes that problem. After texting your phone a custom attention word the app turns the ringer volume up and makes your phone ring. It’s also possible to get the GPS location of your phone in latitude and longitude and a link to Google maps.”

Among the features listed are:

The Pro version also has a “remote wipe” function that will send the Hari Kari command of death upon your instruction, permanently wiping out all information in case your phone falls into the hands of evil doers.

The website is full of support features – instructions, video tutorials, troubleshooting, an FAQ page and an explanation of why the app needs permission to do certain things on your system.

If you have a ‘droid and no way to find it, do yourself a favor and install this wonderful application before you lose your phone and regret you didn’t have it.